(Note: Much of the historical information on this page is excerpted from, "The Carron Net Company of Two Rivers: Manufacturer of Sport and Custom Nets," Monograph 76 of the Manitowoc County Historical Society, Manitowoc, Wisconsin, copyright 2001.)

Carron Net Company, Inc., has grown from humble beginnings making fish nets by hand in the 1930s to become a national leader in the field of sports nets and industrial safety netting.

In 1933, Edward Carron and his son Norman began making fishing nets in the kitchen of their home in Two Rivers, Wisconsin. These nets were sold to local fisherman as well as leading hardware and supply companies up and down the shore of Lake Michigan. At about the same time the two of them, along with other family members including Norman's brother Eugene Carron Sr., started making basketball and other sports nets. Norman traveled throughout the state selling these nets and company records show the first sports net order, a single basketball net, was placed by Coach W.C. Schultz of Delavan High School on September 24th, 1934. The company's first price list containing basketball, volleyball, tennis, ice hockey goal, golf practice nets and fishing nets was published in 1935.

In 1941, World War II brought the company its first opportunity to manufacture camouflage nets for the U.S. Army Corps of Engineers. Throughout the war years, Carron Net manufactured these nets along with air cargo nets, gill nets and barrage balloon nets (many of which were used in England and France on D-Day) as part of the war effort. To fulfill these contracts, the company employed hundreds of local citizens, many of whom as descendants of local fishing families were experienced net makers. As the war drew to a close and with netting scarce, the company purchased large volumes of used and surplus camouflage nets which were cleaned and re-manufactured into sports nets, establishing a basis for the company to be a leading supplier of sports nets in the post-war years. In 1945, the company purchased the building located at 1623 17th Street in Two Rivers which still houses production facilities and the companies' offices to the present day.

From the late forties through the early eighties, Carron's sports net business grew and prospered with the rise in popularity of various sports. Whether baseball in the fifties, tennis in the seventies or volleyball and soccer throughout the eighties, Carron has provided top quality nets to keep up with the games Americans have played. 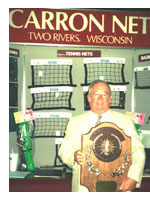 As part of this growth, the company built a second production facility in Two Rivers in 1976. This building allowed the company the additional space needed to manufacture large baseball backstop nets, gymnasium dividers and fieldhouse nets.

When Norman Carron retired from the company in 1986, he sold his interest in the company to its third generation of owners. These four family members - William Kiel Sr., Paul Carron, Eugene Carron Jr. and Don Schweiger - had been involved in the management and operations of the company for many years. Norman was inducted into the National Sporting Goods Association Hall of Fame in 1991. 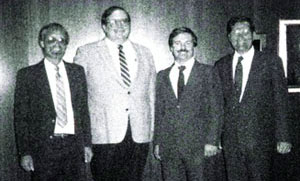 This era of ownership engineered Carron's entry into the industrial netting market in the late eighties and early nineties. These nets for pallet racks, conveyors and other industrial safety and product retention applications now make up a significant segment of Carron's business.
In 2000, William Kiel Sr., grandson of Edward Carron, purchased the interest of his other three partners. At that time, his son William Kiel Jr. and son in law Troy Christiansen joined the company as members of the management team. The late nineties through the present day have seen continued growth and demand for custom-made nets for both sports and industrial uses. In February 2008, William Sr. retired after nearly 50 years with the company, elevating William Jr. into the fourth generation of leadership of Carron Net.

Carron's experience and ability to produce the finest quality netting products to the most exacting specifications continues to earn the company a roster of satisfied clients ranging from professional and college sports teams, leading sporting goods companies and Fortune 500 manufacturers to private individuals needing a single net for their own personal use. This philosophy of "no job too large or too small" has been a guiding principle of the Carron Net Company since its birth 85 years ago. 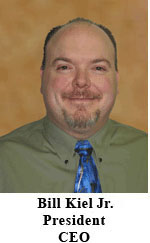